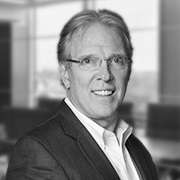 David is currently the Chief Strategy Officer and Director for Bright MLS. Bright facilitated $91.0B in residential real estate transactions in 2017. He is President of MRIS Investors and Chairs its Investment Committee. David serves as Chair of the the National Broker Portal/HomeSnap and is the 2018 Chair of CMLS. Additionally David serves on the NAR Board of Directors. He has served on the Board of Midwest Real Estate Data (MRED), the REALTORS® Federal Credit Union as well as been a member of the NAR MLS Policy Committee. He is a founding member of COVE, an industry think tank comprised of large MLSs and currently Chair of the MLS RoundTable.

David has been recognized by Inman News eleven consecutive years as one of the “Most Influential People in Real Estate.” He has been recognized in the Swanepoel 200 every year since inception plus received its 2018 Visionary Award. David received the inaugural MLS Award Of Excellence from CMLS and also received the National Home Ownership Award from RIS Media.

The Daily Record named David one of the Most Influential Marylanders for his contributions to real estate in 2014 and again in 2017. The National Association of REALTORS (NAR) inducted David into the Dr. Almon R. (Bud) Smith Leadership Society in 2012.

Prior to joining BrightMLS, David served as the CEO of MRIS, Inc. one of the nation’s largest Multiple Listing Services that facilitated over $50.0B annually in residential real estate transactions. He was previously President of Net Input, an Internet-based business consulting practice serving Fortune 500 clients in apparel, media, sports and real estate. From 1980 to 1997, he managed organizations that successfully defined, marketed and delivered information systems to Real Estate professionals.

David is frequently called upon as a keynote speaker and panelist for industry events and writes a regular column for the Washington Post about the Mid-Atlantic region’s housing market and trends.